Some people seem to think I do a lot of different things and that I push pretty hard when I do them. I’m not very gradual; once I’m into something, I’m really into it. My wife likes to laugh at my T-shirt drawer because she says you can trace the evolution of my hobbies over time based on T-shirts. The older shirts are all about car racing. These days the newer shirts are all about powerlifting.

One of the big takeaways that people take from this is that I have a lot of motivation. But it’s actually the opposite – my motivation is actually horrible! If I’m not into something, I can barely make myself do it. I’ve got to make it cool first.

So today I thought I’d talk about motivation, and the very personal reasons for why I push myself so damn hard, when I push myself.

And it really comes down to three girls in my life.

My oldest daughter is Adeline, and she’s now 5. Like most Dads, when she was born, she rocked my world. Suddenly, there was this whole other person that was just like me and my wife! And just as suddenly, we had to take care of her and do everything for her. What a wake up call to love. There’s no way to learn selflessness like having kids. You literally put them before yourself.. because you have to – they can’t do anything on their own yet – and they have to learn absolutely everything straight from first principles.

That selflessness can really become an engine for motivation. At first, your kids are an external motivation because you’re doing everything for them. But over time this internalizes for most people, and you start doing things because of them. They need something to aspire to, and you hope you can live up to their expectations.

That’s a funny way to think of it. Kids really have no expectations, but we still want to live up to what they see as their Mommy and Daddy. I want to be strong because my son thinks I’m strong. I want to be the person they want me to be.

What an engine. I feel this with my other two kids also, but Adeline was the first.

How do your kids aspire to what they see in you?

My wife Maureen and I got married in 2010. It was a magical, mystical, giddy whirlwind of a day and it has led to an incredible marriage.

Ideally, getting married is a sort of precursor to the kind of motivation that having kids brings. Marrying Maureen catalyzed my understanding of motivation and where it comes from. It was the most poignant example of being driven by someone outside of myself that I’d ever had. I was motivated because of her.

I’m motivated because of my wife and kids, but not for them. That’s a subtle but important distinction. When you let your motivation be directly for someone else - for “an other” - it can fail based on how your relationship changes. If the other isn’t interested, your drive will falter. But if it’s because of the other, because of what they mean, and because they deserve the best you have to offer, whatever you’re doing doesn’t have to hold their interest. It doesn’t have to be what they care about. It just has to be good enough for them.

My wife doesn’t care a lick about powerlifting. But she’s one of the big reasons I’m so driven with it. She deserves the best I’ve got, every day. And every day, I hope I can live up to what she deserves.

What does your spouse deserve from you?

And now we come to the biggest motivator of all: my sister. Kristen has Cerebral Palsy and some other conditions. She can’t talk, she walks slowly, she can do some sign language, she still wears diapers. She can’t understand even simple abstract concepts like numbers or money.

And she’s one of the happiest people I’ve met. Especially as a kid growing up, she was always happy and smiling.

Kristen will never do half the things I’ve ever been able to do. She’ll never fall in love, she won’t go to college, or have a job, or play a sport. And it’s because of her, that I need to do these things. I need to do my best, every goddamn day, even if my best turns out to be pretty shitty that day.

Good Will Hunting has a scene that actually sums this up really well. 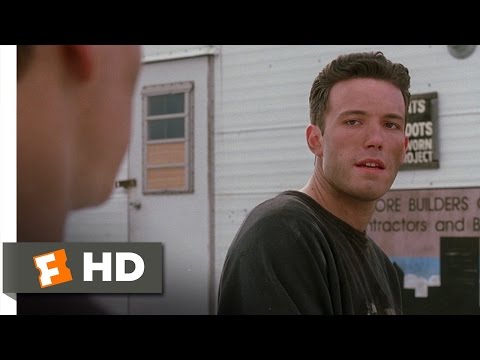 That’s what I think when I’m looking for motivation. It’s not a negative thing. I’m not down on myself. I’m not angry. It’s just very honest and very real when I say to myself, “Fuck you Greg. You owe it to Kristen.”

Earlier this summer, the Air Force Rock Band played at the bandstand at the beach. You wouldn’t expect a military rock band, but they were great. They had a great patriotic message too. Near the end of the set, the lead – an Air Force Sergeant – pointed out a young boy wearing elephant pajamas dancing. Then he said to the crowd, “This is why this country is so great! This is why freedom matters. The military goes all around the world fighting and making sacrifices so that this boy is free to dance around wearing elephant pajamas.”

What we all have is a privilege. We owe so many others – God, our country, our friends and family – so much to do what we do. All of them deserve our very best.

But it doesn’t matter what we’re doing. It could be kickboxing, doodling and drawing comics, learning how to tell stories, camping, fishing, sports, or math. It could be having an unbelievable time at the beach listening to great music and dancing in elephant pajamas. As long as we’re living it fully and doing our very best. That’s what we deserve.

We really need to remember this with our kids. As parents we can sometimes project onto our kids what they should do. But it doesn’t matter, not really. If they want to draw, or do ballet, or use tools, or play the wrong sport.. let them. As long as they do their best. As long as you and them find the right motivation.

The best way I can teach this is to do it myself.