I’ve been spending a bit more time on Twitter recently - for better or worse, it’s the place where a lot of today’s public intellectual debate occur. Activists, professors, politicians, entrepreneurs, billionaires, and everyday people all trade ideas and blows in one place. It’s a stunning play to see acted out, equal parts beautiful new ideas and decadent outrage.

It’s the outrage that’s got me thinking. A lot of people seem to have it and they seem to have it all the time. They also seem to weigh the value of their opinion based on the righteous level of their outrage; units of screaming is what’s measured on the scale. This type of outrage seems some combination of wrong, selfish, and easy for the outraged, not to mention intellectually dishonest. Most importantly, it isn’t the right value with which to measure opinion.

Karl Marx’s Labor Theory of Value is the same problem for price and economics. The traditional model of economics suggests that prices are dictated by supply and demand. Demand is based on what you get out of the thing you’re buying (e.g. “is it worth it?”) and supply is based on scarcity (e.g. “can I get it?”). But Marx proposed a theory based instead on the value of the labor that is required. The entirety of Marx’s view is far more nuanced, but it’s not unexpected that a focus on the labor input of a good or service would be easy to subjugate to a set of communist ideals.

In a free market, it’s difficult to measure the value of a good or service based on an intrinsic property like labor. Make a T-shirt from scratch and try to sell it for $5,000, see who buys. This is why specialization and trade are so important.

Similarly, in a free market of ideas, it seems difficult to measure the value of an opinion based on an intrinsic property like strength of feeling. As a corollary, I’ve deemed this the Outrage Theory of Opinion.

The reason Outrage Theory of Opinion seems to work so well is that it draws power from our emotions. Eric Weinstein points out that:

“We are told that we are entitled to our own opinions but not our own facts. This leaves out the observation that the war for our minds and attention is now increasingly being waged over neither facts nor opinions but feelings.”

He points to the concept of Russell Conjugation as the most important scientific concept that ought to be more widely known. Given how much priority it takes today in our dialectic - and, by proxy, all other fields - it’s hard to say he’s wrong.

One major problem with it is that we haven’t developed any tools against it yet. Nassim Taleb explains how a strongly held but minority view can take on a dictatorial role over a whole population.

We need tools to separate fact and theory from emotion, empathy, and belief. Our only measures on Twitter are likes and replies, so the closest proxy we have is the idea of getting ratio’d (where replies far outweigh likes and retweets) and this is still only a measure of outrage.

One possible tool is to use Graham’s Hierarchy of Disagreement. 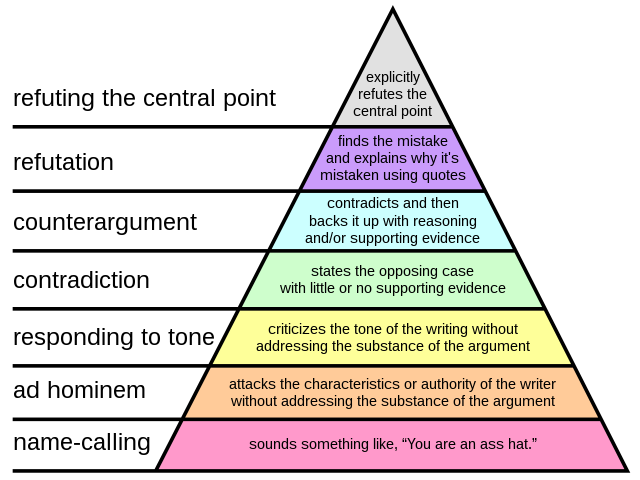 If we developed a platform where virality and emotion was replaced by a measure of the value of the argument itself, maybe we could begin to measure our articulation by something other than outrage and emotion. For sure, we’d need to quickly develop second order measurements about the measurements themselves and the users doing the measuring (e.g. those that still mark an argument as Ad Hominem because they disagree), but you should be able to see those trends fairly quickly. A debate where a cogent refutation of a point or a useful counterexample bubbles to the top is a useful argument to have.