An Automated Method For Making Your Writing Suck Less

Last night I was on a roll. I had all these thoughts going through my head. I had the main bits down for how to improve my method of writing and I was going through it point by point. I had viable arguments and even specific sentence structures all setup and ready to go. The thoughts were flowing like drainage off my overwatered garden.

I was in bed the whole time. I didn’t get up. I didn’t write anything. That was a huge mistake.

The whole time I was laying there, a secondary process was firing events constantly saying “you should get up, go downstairs, and start typing”. A monumental amount of pure, distilled laziness kept throwing all these events on the ground. Now, that laziness has sublimated directly into frustration.

Anytime you’re struck by some inspiration, no matter how miniscule or irrelevant it may seem, don’t ignore it! If you’re free (and laying in bed counts as free time), then get your lazy ass up and start putting the proverbial pen into the digital inkpot. I wonder how many opportunities for interesting thoughts are lost simply because those secondary events that tell you to actually write and not just think get dropped. Too often for me. This is one of the hardest parts of writing: actually doing it.

From now on, I will be working in a much more focused manner on letting those inspirational moments turn into effort. It’s a matter of getting out of one’s own way and turning thoughts into words on a page. Don’t expect your words to be a final, immaculate thought. Just get out a working first version.

Writing is hard. Really hard. Harder than programming. Harder than most of the math I’ve done. It’s harder than building an architecture, or understanding algorithmic complexity, or remembering grammars for regular expressions.

You followin’ me? This stuff is way hard. That’s why I keep trying to toss out reasonable sized blog posts that are actually coherent. I go over these things way more than their subject matter might suggest. To you, these are just some guy’s opinions about random subjects. To me, they’re a vehicle for better understanding how to put thoughts - perhaps the most powerful substance known to man - out into the world. Anybody that cares at all about thinking well, by necessity must also care about writing.

I had all these wonderful, perhaps even eloquent things to say about this last night. That’s why I’m so pissed right now. I didn’t write any of them down, even as a checkpoint to remember where my thought process stalled. If it’s so hard, I should be giving myself every opportunity to make it easier.

Hopefully I can recap a few of the things I was thinking about.

The thing that makes writing so hard is that the set of rules for “good” writing is completely fluid. They’re not concrete, and the best, most transcendental writing usually breaks them anyway. One of the most joyful things about programming is that there’s always some axiom, rule, or concept to fall back on. It’s still creative, and the possibility for elegant solutions exists, but the elegance of a solution is often defined by how fundamental or generic it can be. Elegance always passes through axiomatic simplicity at some point.

Writing has no such strictures. It can be simple and profound, or complex, ornate, and ostentatious and still achieve the effect that the writer is hoping for. Take a look at some of the works of Theodore Roethke, Kurt Vonnegut, William Carlos Williams, or Langson Hughes. These guys used language to induce profound reactions in their readers. They can toy with you, knowing just how well they’re setting you up for some grand anticlimax. They can make you laugh, cry, or breath a deep sigh of relief. They can make you yearn wistfully for a better life unfound even where you think it hides, or they can make you revolt against false powers bent on your slavery. I’m moved nearly every time I read anything they have written.

The alphabet, syntaxes, and grammars that parse writing are infinitely more complex than those that parse a program. Without guidelines, it’s difficult to come up with statistical analyses of a piece of text that could offer an area of improvement to the writer. Perhaps there are still some rudimentary tests though.

I was looking at an article on document and text visualization the other day and a couple of the visualizations struck me as interesting. Being the introspective person that I am (or narcissistic prig if you prefer), I tried applying two types of analysis to my own blog.

Here are the results: 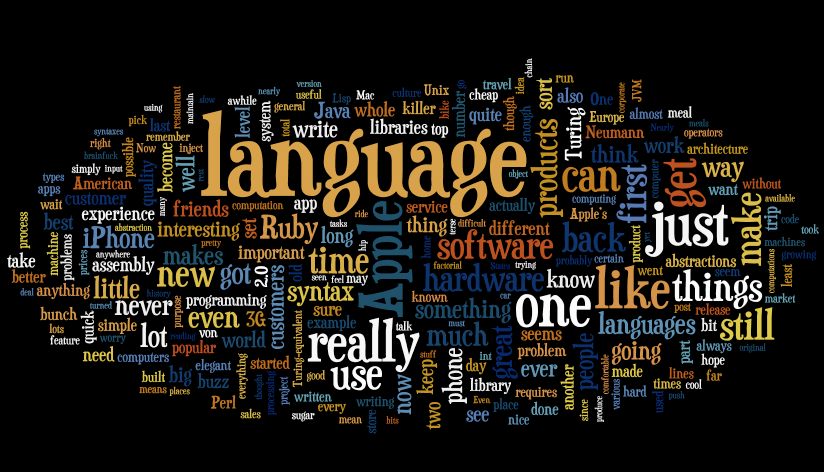 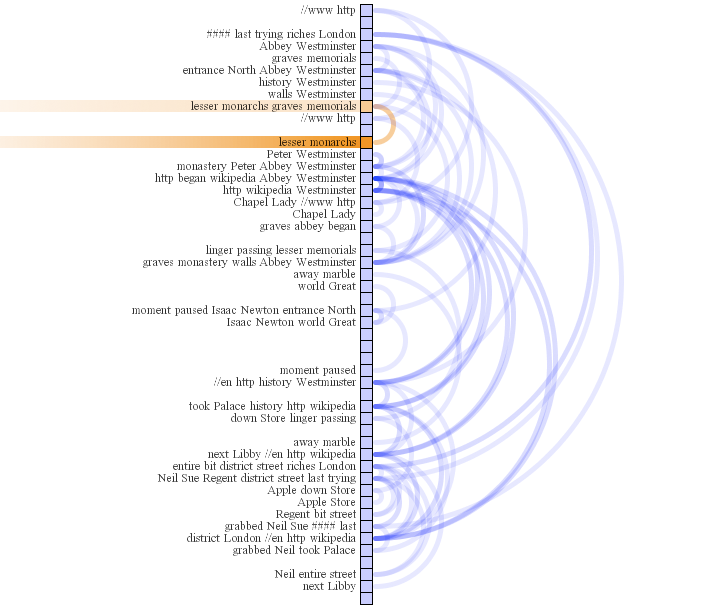 Let’s start with the Wordle, which is comprised of only my last five posts. Wordle filters out very common English words like “the” and “of” and then produces a cloud of the most common words (250 of them in this case) with size representing relative number of occurences.

Did you notice anything looking at it? Most of the bigger words make sense: “language” - yeah I had a whole post talking about that, “Apple” - yeah that too, “Ruby” - that makes sense. What about “just”, “like”, and “really”? Those seem reall—(crap).. those seem suspicious.

I went through my previous posts to see how I used those three words. The short, shy answer is: I overused them or used them poorly.

Let’s assume for a moment that you are an astute reader interested in what I, the author, have to say - a pleasant fiction for me. If you are interested in what I’m saying, then the best thing I can do is say it as simply and elegantly as possible. My primary aim is to take my thoughts and translate them to your brain coherently. If I’m watering down my thoughts with middling language, I’m downshifting them into a less forceful thought, and that’s just really not exactly like the original thought. See?

I’ll say it another way. Relativism being one of the primary misguided modes of thought in our time, I want to counteract it as much as I can. That means saying exactly what I think in a manner with which you will understand it, if not agree with it. That’s why I think my thoughts could be relevant to someone reading what I write. I believe that there are certain universal truths that exist, and I want to be able to give voice to the ways in which I try to understand more about them.

Taking a statistical look at the words I’ve been using makes me realize that I’m still watering things down. I’m taking the easy way out and suggesting that one thing is like another. I’m just making a statement a little bit gentler. I’m really trying to overstate my case. I’m not getting the point across as well as I am able.

I realize that now.

One huge dose of humility down, one to go. The Phrase Arcs applet is near and dear to my heart, as it uses the Processing API - yet another DSL high on my list that I’ve only toyed with at a rudimentary level.

This particular set of arcs is from a post I wrote describing a day in London. Note the highlighted arc. “Lesser monarch” seemed like an interesting combination of words at first, especially in conjunction with graves and memorials. Search through the post and you’ll find these three two word phrases:

Hmm.. a bit ostentatious, don’t you think? It seems to me like I’m trying to use an ornamental piece of language to cover a lack of new content. I’ve latched onto a particular phrase in my head rather than using those fluid rules of grammar and content to create thoughts the reader can actually ingest. Indirect repetition is not the same thing.

I’ve found a couple of concerning problems in my writing using some nifty automated text visualizations. That’s quite humbling. You have no idea how many “sort of“‘s, “really“‘s, and “like“‘s I had to consciously prevent myself from writing in this entry.

Since you’ve managed to make it this far, I’ll let you in on a little secret. I’m gearing up to participate in NaNoWriMo this November. I don’t know yet if I have the chops to write anything of substance, but I’m going to give it a shot.

In the meantime, I’ll keep plodding along. Words being the simplest, most axiomatic form for any human thought, it’s important that I get better at it. You should get better at it too, even if you’re already really good.

It’s easy to feel too stupid, too lazy, or too complacent to work hard at a problem like this. Whenever that happens, I default back to a quote of Paul Graham’s about Isaac Newton and his work ethic: “You only get one life. Why not do something huge? The phrase “paradigm shift” is overused now, but Kuhn was onto something. And you know more are out there, separated from us by what will later seem a surprisingly thin wall of laziness and stupidity. If we work like Newton.”