Ten years ago, I made some predictions. It was bound to fail, unless I turned out to be some kind of Superforecaster. It did and I’m not. Ten years later some of these things sound like the silliest and unlikeliest things that you could imagine.

And that’s really the fun of it.

Trying to make predictions is a rewarding way to try to observe the world and where it’s going. It’s really only a failure if you take yourself too seriously. You’re gonna be wrong, but you’ll learn interesting things along the way; first about your point of view, then later, about observation and outcome.

2020 sounds like another good time to make some more predictions, but before I do that it’s worthwhile to revisit my tragic first attempt. So here we go, what did my 2010 self say about where things were going?

When I wrote this, I didn’t really investigate any of the science behind it. It’s true that inductive charging is a thing now, and it’s also true that we pass a lot of our signals to and fro through the aether. But we still have pesky power cords everywhere. There are no wireless power networks in homes, and we have to keep track of and charge more devices than ever. The first thing I do when I get in my car is plug my phone into the charger. At least batteries are better.

Global Energy Needs Will Be Solved

It turns out that I was both skeptical of public opinion and wildly optimistic in 2010. Hopefully not much has changed because those both seem like good things to be, but global energy needs are definitely not gone.

In fact, we have an ever larger debate raging about where to get all our watts. Fossil fuels have single-handedly been the energy driver to lift us out of the Hobbesian nasty and short life of our ancestors, and yet we vilify them for it. It’s true that we need to move on from them now, but the rage around the subject today is the symptom of short-sighted activist culture prevalent everywhere.

There have been great strides in abundant and cheap energy over the last ten years. Solar power is getting increasingly cheap. Battery capabilities continue to increase, led in large part by Tesla and it’s partners. Nuclear options have proliferated (har), and TerraPower in particular look on the cusp of something big if they can wade through the ocean of policy problems.

On the demand side, our consumption of power has started to waffle too. It’s still increasing overall, due in large part to places like China and India, but the richer Western countries are flattening out or even decreasing. Where consumption is still increasing, the curve is decelerating. Signs indicate an end to Jevons Paradox and a decoupling of economic growth from raw material use and energy consumption, as documented in McAfee’s book More From Less.

I still think this will happen by the way, I just had the timescale wrong. I said I’d hold my predictions, but I give this a 50/50 in the next 20 years, 90% in the next 50 years, and a near certainty in the next century. It has to be.

The timeline on this is too long, so we’ll see. Research is definitely being done.

Mail isn’t completely gone, but it’s definitely on it’s way out. The USPS now tries to compete against UPS and FedEx to deliver all your Amazon packages, which is what I expected. Mail is functionally a thing of the past, and the small number of mailers and magazines we still occasionally get are just the dinosaurs that haven’t quite bit it yet.

This one rings more true. Mainstream media is performing the hysterical death throes of a dying monster. Magazines are less and less common, and people get their news from Twitter and Reddit. One thing I wonder about is just how pervasive this shift actually is. In other words, Twitter and Reddit are filling the holes left after the screams of mainstream media are gone, but there’s a giant world beyond the coastal techno-elites. What about them? Are newspapers and magazines and 6 o’clock news still holding strong? I really don’t know.

Either way, screens are where people tend to read these days, when they read. People seem to read less in general and they read shorter lengths too. Articles, blogs, and tweets are favored over longform books. This is changing the way we formulate our thought, which is something I hope to explore more deeply soon.

I wish this weren’t so, and more research is pointing to the value of reading on paper versus on a screen. Regardless of how much screen time I get - which is a lot - most of my reading will stay on paper. You’ll never tear me away from my books.

Welllllllll, sort of. This was actually a few predictions rolled up in one. Let’s start with some pretty pictures, especially this one: 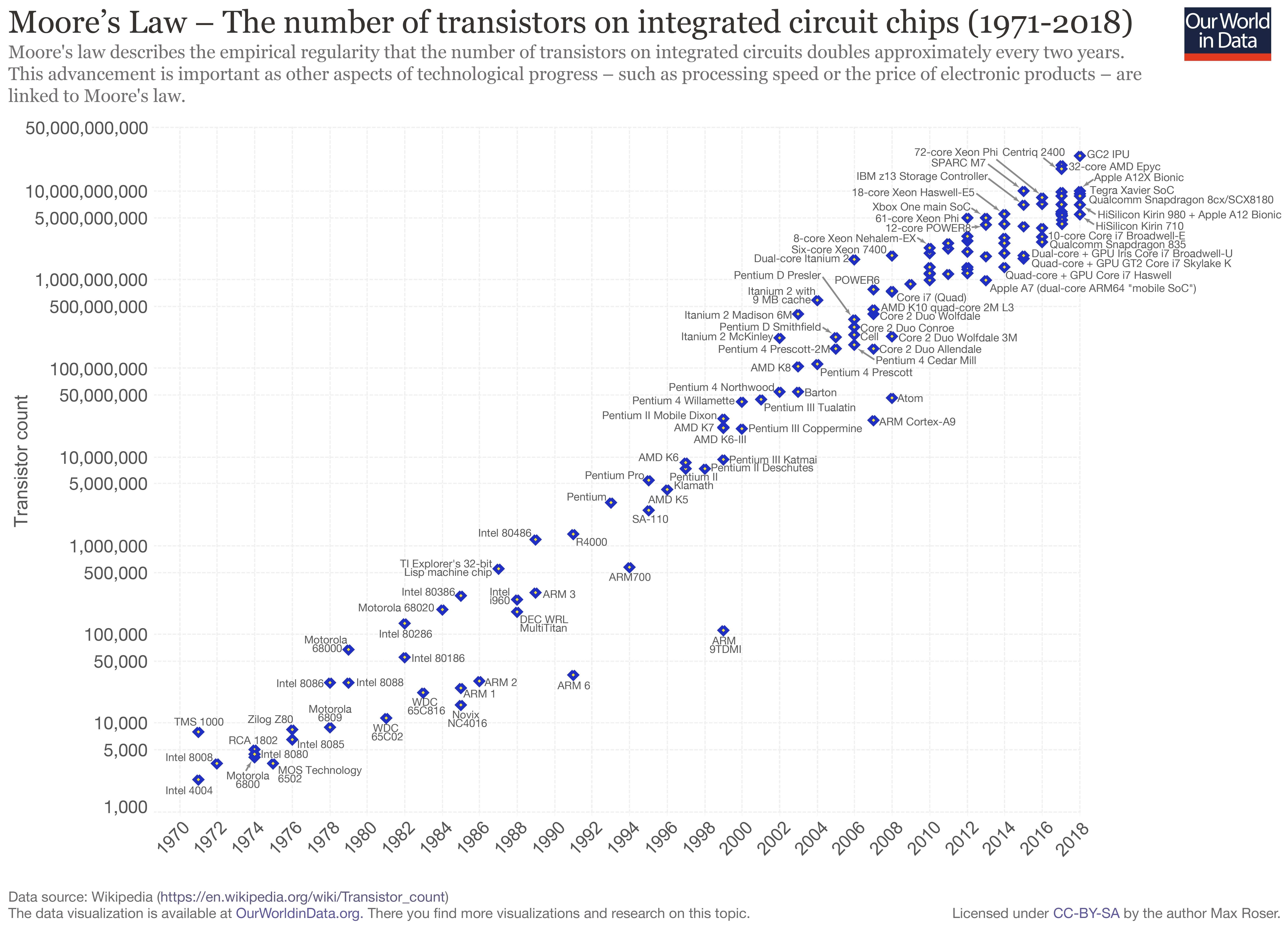 Amazingly, it feels like transistor counts have been tracking pretty closely.

But I was precise in my prediction. I said the exponential curve will hold for processing speed and memory. CPU speed is officially dead per chip, with speeds still generally in the 2-4 GHz range. The industry has completely cycled over to multi-core and GPU acceleration trends, which are working quite well, thank you very much, and so overall processing capabilities are still trending upward quite quickly. Meanwhile, it’s not that expensive to go get a 16TB hard drive these days, which is only one doubling off of what I said (32 TB). Laptops regularly have 16 or 32 GB of RAM and, if you have a briefcase full of cash, you can get a desktop with RAM measured in terabytes. Whether you are actually capable of using all of that is another question; few people are.

Which brings me to the last part of the prediction:

For almost all consumers, specs won’t matter. What will matter? Access and availability.

That’s pretty much true. Only alpha-nerds and the kind of people that know both the 0-60 and 5-60 rolling times for every Lamborghini ever made really care about the precise specs of their computer or phone or tablet. For the rest of us, access, availability, and connectivity are what really matter.

There’s one other minor thing I’d like to point out here: you shouldn’t bet against exponential curves until.. you shouldn’t. We talk a lot about exponential growth, especially as it pertains to economics, GDP, the internet and related topics. I’ve begun to wonder for awhile now if we’re doing that wrong. If the exponential is only half of the story. If so, we really should be thinking about sigmoid curves and, in particular, the Gompertz distribution. Moore’s Law is a great example. It’s a prediction and a social marker for the semiconductor industry. We’re smart apes, so we’re going to keep pushing the social construct that is Moore’s Law until we run up against physical barriers that prevent us going further. Heat dissipation and manufacturing problems are going to kill it pretty soon, at which point we’ll start asymptoting out towards the limits and find new and interesting dimensions to optimize.

Again, there’s nuance. And not just because I don’t want all of these to be failures. If you look at desktops, you get this. 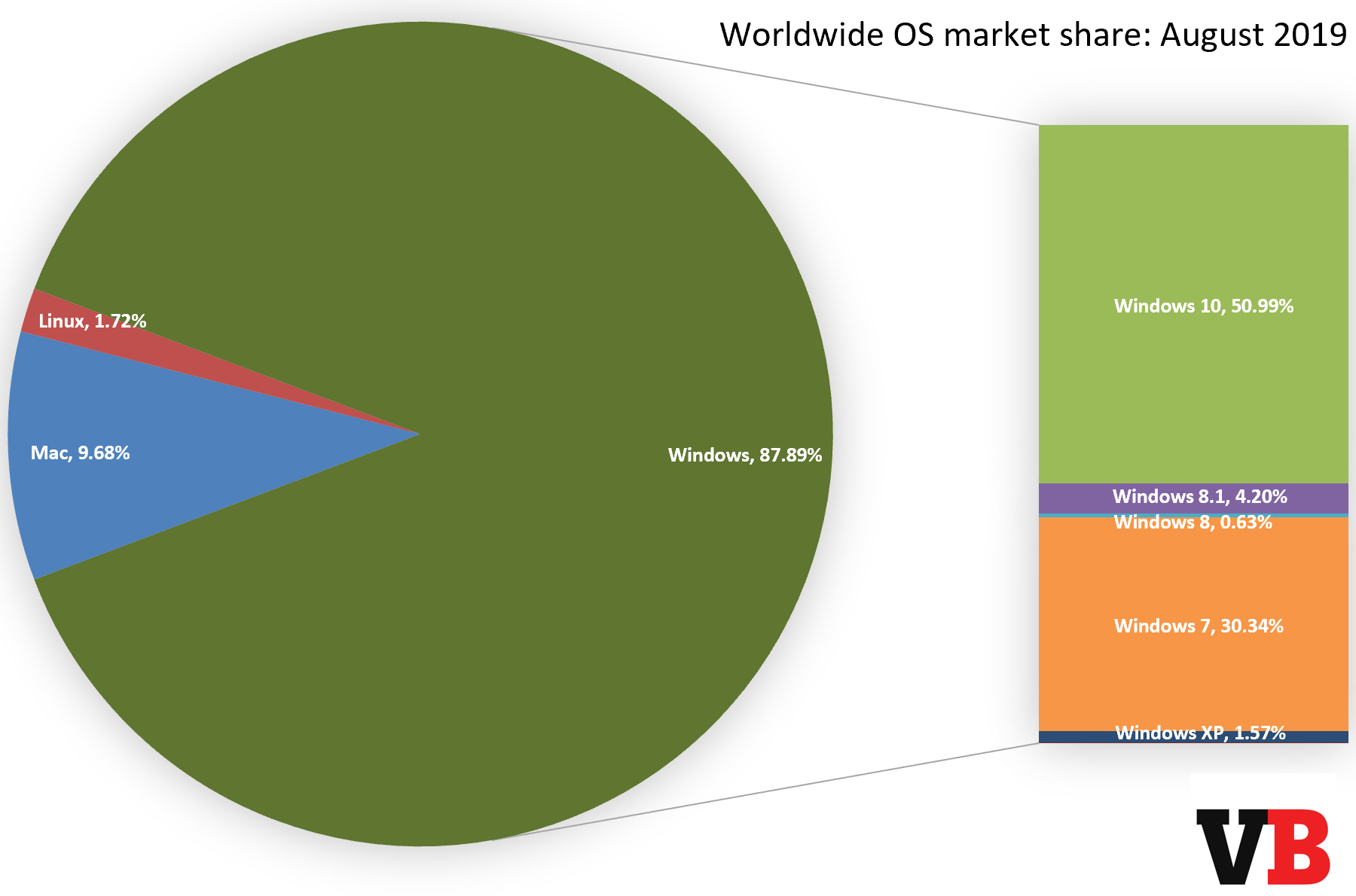 That’s a big fat no. And huge credit to Microsoft, who have surged out of the post-Ballmer era and become a respected giant in computing once more. I use an MS product as an editor these days (on my Mac) and it’s damned good. GitHub is now a Microsoft product too. They’re recaptured the development segment in a way that seemed impossible ten years ago.

He 5X’d a multi-hundred billion company in less than six years.

Has to be in the conversation for greatest CEO of all time. pic.twitter.com/gC7to2YfOe

But who uses laptops/desktops these days? Workers and computer nerds like me and that’s about it. Everyone else is on a phone or a tablet. And in that sense, Windows is almost nowhere. Look around your local coffee shop and you won’t see it. You’ll see everyone connected to the internet and using all sorts of different services and software. And most people don’t even think about the computer they’re using, or that it fits easily in their hand.

People don’t care about computers, they care about what they can do with them. This was famously captured in Marc Andreessen’s Software Is Eating The World and it’s as true now as when it was published in 2011.

I didn’t know what new inputs would really take off and I think the reason I’m wrong on this one is that we really still don’t. It looks like AR and VR are the way to go. That’s where the research, discovery, and company creation is going. Oculus was the first to hit a small jackpot here, but the field is still in nascent stages and nothing has captured a meaningful percentage of the world’s interest yet. Again, I think this will still come. But I think I was wrong on the timeframe. I’m going to give it another ten years.

Most of these were wrong, but there was some germ of truth in them that’s nice to see in retrospect. I’ve got a budding 2020 list coming soon, and it will be fun to see just how things look in 2030 - there’s at least as much change coming in the next decade as there was in this one!